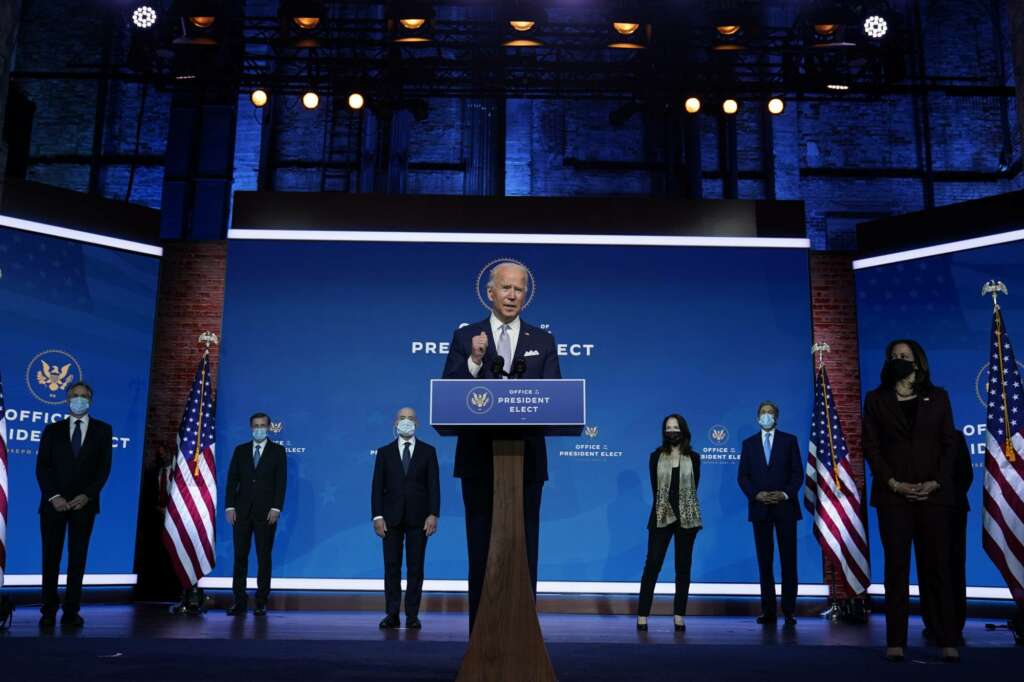 President-elect Joe Biden says he is “pleased” that his administration has officially been allowed to begin the transition process in filling out a new government.

Biden said Tuesday in Wilmington, Delaware, that receiving the transitional status known as “ascertainment” would allow his team to “prepare to meet the challenges at hand” in transferring power from the Trump administration to his own.

Late Monday, the General Services Administration “ascertained” that Biden is the apparent winner of this month’s presidential election. That process gives the incoming president and his team access to officials at federal agencies and directs the Justice Department to work on security clearances for transition team members and Biden political appointees.

Biden spoke as he rolled out his picks to fill top national security slots in his Cabinet including secretary of state, national security adviser and a new, Cabinet-level post dedicated to climate change. He said he hoped his nominees receive a prompt confirmation process.

HERE’S WHAT YOU NEED TO KNOW ABOUT PRESIDENT-ELECT JOE BIDEN’S TRANSITION TO THE WHITE HOUSE:

President-elect Joe Biden formally introduced his national security team to the nation, building out a team of Obama administration alumni that signals his shift away from the Trump administration’s “America First” policies and a return to U.S. engagement on the global stage.

— Biden transition gets government OK after Trump out of options

HERE’S WHAT ELSE IS GOING ON:

President-elect Joe Biden says his national security team will lead the way in reflecting the fact that “America is back” on the world stage.

During a speech Tuesday in Wilmington, Delaware, Biden said that his team would “embody my core beliefs that America is strongest when it works with its allies.”

In rolling out his national security picks, including top posts for State Department and Department of Homeland Security, Biden said the nominees show “experience and leadership, fresh thinking and perspective and an unrelenting belief in the promise of America.”

The State Department alone has seen a significant number of departures from its senior and rising mid-level ranks during the Trump administration. Many diplomats have opted to retire or leave the foreign service, given limited prospects for advancements under an administration they believed did not value their expertise.

A leading Republican political committee has begun airing a campaign ad warning that if a Democratic Senate candidate wins a January runoff election in Georgia, liberals will “control everything” in Washington.

The choice of words is noteworthy because it implies that President Donald Trump has been defeated by Joe Biden. That’s a fact that Trump has refused to acknowledge more than two weeks after the election was called for the Democrat, and that many top Republicans have also been loath to concede.

The ad says, “The radical left bought Ossoff. Because if he wins, they control everything, and we lose.”

The spot began airing the morning after the General Services Administration formally agreed to let the transition to a Biden administration begin. The leadership fund is closely aligned with Senate Majority Leader Mitch McConnell, R-Ky.

Democrats must win both Georgia races to capture the Senate majority. That would create a 50-50 chamber, which Democrats would control because Vice President-elect Kamala Harris would cast the tie-breaking vote.

Copyright © 2020 . All rights reserved. This website is not intended for users located within the European Economic Area.