Pence, during trip to Wisconsin, dings for Biden for not visiting state in 659 days
Advertisement

Ukraine & Russia: All Together Now?

Somebody's Got to Stand Up to Vladimir Putin

Beijing Olympics: Their Importance to the Chinese Government

Whether it's George Bush, Barack Obama, Donald Trump or Joe Biden, Vladimir Putin Always Seems to Get Away With It

NBC Will Not Send Announcers to Beijing -- for the Wrong Reason

And Let’s Not Forget Putin’s ‘Minor Incursion’ In Georgia 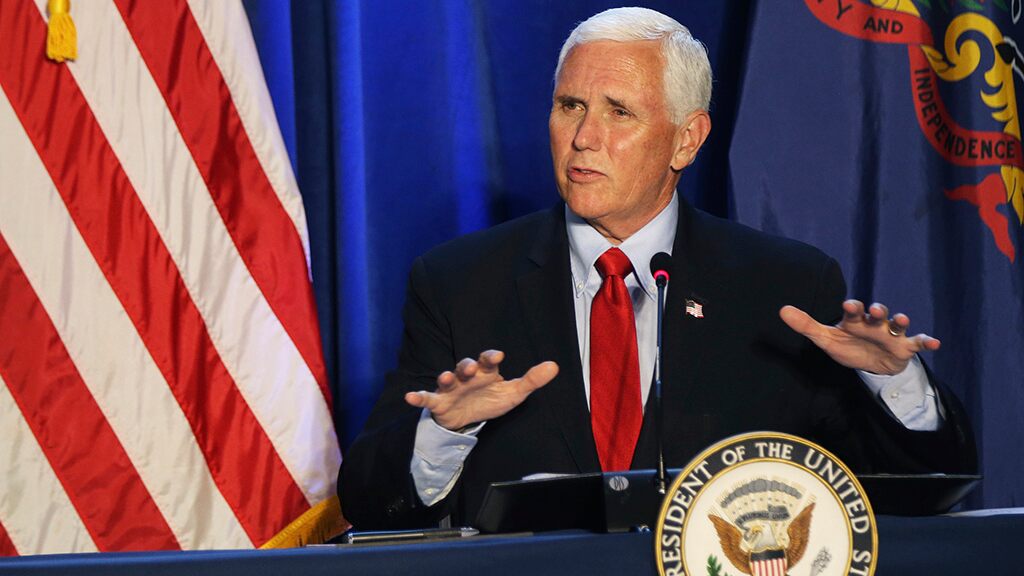 Vice President Mike Pence, while in Wisconsin on Wednesday, dinged Joe Biden for not being in the state this week as originally planned — drawing attention to how Democrats scrapped plans to hold the convention live from Milwaukee and opted for virtual speeches in light of the coronavirus crisis.

“I did hear the Democrats were supposed to have their national convention in Wisconsin, but they couldn’t make it,” Pence said at an event with Tankcraft Corporation, a metal manufacturer in Darien. “That’s really nothing new. I heard on the way here that Joe Biden hasn’t been to Wisconsin in 659 days.”

BIDEN’S REPUBLICANS: THE GOP FIGURES PLAYING A ROLE IN THIS WEEK’S DEMOCRATIC CONVENTION

Pence pointed out that President Trump and his son Eric Trump visited the state separately earlier in the week.

Though the former vice president had planned on giving his DNC acceptance speech from Milwaukee Thursday, Biden will remain in Delaware and give his speech from his home state. Biden has also chosen to conduct virtual campaign events in the wake of the coronavirus as opposed to traveling around the country to give his speeches in person.

Pence’s visit marks the fight over the swing state which voted red in 2016, when Trump narrowly won in the presidential election with a one percent gain over his opponent Hillary Clinton.

Even though Pence went after Biden’s campaign for cancelling the in-person convention, Trump’s campaign similarly cancelled their convention, which was meant to be held in Jacksonville, Fla. The Sunshine State has seen one of the highest increases in the number of coronavirus cases reported since the outbreak in the U.S.

Instead, Trump is expected to deliver his acceptance speech from the White House while other Republican delegates will meet in person in Charlotte, N.C., for a few hours to announce their nomination. A reported 150 guests will be in attendance.

Details for the Republican National Convention, which is expected to run from Aug 25-27, have not been released yet.

The Associated Press contributed to this report.