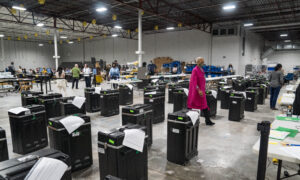 A federal judge presiding over a major election lawsuit in Georgia on Sunday issued and then reversed an order directing the state to cease and desist wiping or resetting election machines.

“Defendants are ordered to maintain the status quo & are temporarily enjoined from wiping or resetting any voting machines in the State of Georgia until further order of the court,” Judge Timothy Batten wrote in an emergency order issued Nov. 29.

The judge reversed the order not long after, explaining that the defendants are not in possession of the machines.

The change of course by the judge drew a flabbergasted response from Lin Wood, an attorney associated with the Trump campaign.

“What??? Judge reversed order based on Defendants’ claim that GA Counties control voting machines,” Wood wrote on Twitter, adding that the machines are owned by the state and that the Georgia secretary of state administers elections.

“Why are GA officials determined to wipe these machines clean [by] resetting them?”

The plaintiffs in the lawsuit on Sunday filed an emergency motion which included an affidavit featuring a Nov. 25 message from an election official stating that the ballot-counting machines would be reset to zero on Monday, Nov. 30, before performing a recount.

“The process will begin with an L & A – resetting the machine to ‘zero’ to begin the recount,” the text of the message stated before describing the specifics of the recount process.

The affidavit was written by a GOP poll worker who says he or she addressed concerns about wiping the machines to the election manager.

“Because the plan on Monday is to wipe the voting machines clean, and start from 0 so that we can recount using those machines, I’m concerned by what I am reading online,” the poll worker wrote, according to the affidavit. “I am seeing lots of notices from lawyers about possibly impounding the machines. Lawyers are now saying that the machines should be confiscated immediately before this happens to protect forensic data. They are saying those machines need to be impounded ASAP. Yikes. Maybe I’m being overly paranoid but let’s be sure this is what we’re supposed to be doing.”

The supervisor responded, “It’s what we are supposed to do. It will take a court order to stop this process—so I guess we need to keep watching the news. If we get a court order to stop, we will see it in our SOS information. The issue is, the Atlanta area has already started,” the elections manager wrote.

When the poll worker asked if the reset will wipe the forensic info from the machines, the manager said that “Atlanta already did it.”

The lawsuit in question is being litigated by Sidney Powell, an attorney who defended former national security adviser Lt. Gen. Michael Flynn. President Donald Trump pardoned Flynn earlier this week. The Trump campaign has said that Powell is not part of its legal team.

Georgia Republican Party Chairman David Shafer wrote on Twitter after the judge issued the order that election officials in Fulton County were updating the software on voting systems earlier the same day.

“It is outrageous that we cannot rely on Fulton County elections officials to do their jobs without unexplained four hour delays, interventions by private attorneys and federal court orders.”

The lawsuit makes a number of allegations regarding the voting machines and software supplied by Dominion Voting Systems, which is used in Georgia and many other states.

The lawsuit cites an affidavit written by a former electronic intelligence analyst under 305th Military Intelligence Battalion, who testified that the software used by the Dominion machines was accessed by agents of malicious actors, such as China and Iran, “in order to monitor and manipulate elections,” including the 2020 election.

The suit further alleges that the machines are connected to the internet, even though they aren’t supposed to be, and are easily hacked, based on multiple expert declarations. The machines have built-in functions that allow operators to manipulate the results, several experts cited in the lawsuit said.

Dominion has vehemently denied that its machines were used to manipulate vote counts.

“All U.S. voting systems must provide assurance that they work accurately and reliably as intended under federal U.S. EAC and state certifications and testing requirements. Dominion’s voting systems are certified for the 2020 elections.”