AI Chatbots Are Colonizing Our Minds
Larry Fink will ultimately give up on “ESG investing” or the market will grind him and his Blackrock behemoth into powder. When states like Florida pull all investments worth $2 billion from Blackrock, it hurts. Fink, whose ego is as big as the solar system, views such actions as “demonizing the issues” and “personal attacks”.

Fink’s complaints, delivered at the current WEF meeting in Davos, highlight a somber mood among global elitists. They are reeling from the public resistance to their crackpot schemes and they just cannot understand why anyone would be less than thrilled with their magnificence.

In fact, we are disgusted and fed up with them. ⁃ TN Editor

BlackRock, the world’s biggest asset manager, has faced increasing backlash about environmental, social, and governance (ESG) investing. A handful of US states have pulled billions of dollars from BlackRock funds over accusations of “greenwashing,” hurting the fossil fuel industry and turbocharging America’s “woke” culture.

On Tuesday, BlackRock’s Larry Fink told Bloomberg TV at the World Economic Forum in Davos that ESG investing has been tarnished:

“We are trying to address the misconceptions. It’s hard because it’s not business any more, they’re doing it in a personal way. And for the first time in my professional career, attacks are now personal. They’re trying to demonize the issues.”

The Republican crusade, including states such as Florida, Louisiana, and Missouri, said they would pull funds out of BlackRock, citing that the asset manager’s ESG efforts could impact investor returns.

In December, Florida made the most significant withdrawal, pulling $2 billion from BlackRock.

“Using our cash to fund BlackRock’s social-engineering project isn’t something Florida ever signed up for.

“It’s got nothing to do with maximizing returns and is the opposite of what an asset manager is paid to do,” Jimmy Patronis, Florida’s chief financial officer, said in a recent statement.

Meanwhile, Texas Lt. Gov Dan Patrick has urged state officials to label BlackRock as a hostile entity for its action in the attempt to crush the oil and gas industry.

BlackRock is “capriciously discriminating’” against fossil fuel firms, Patrick said as he called for the asset manager to be added to the list of financial firms that “boycott” fossil fuels.

Several other states are pushing back on BlackRock. 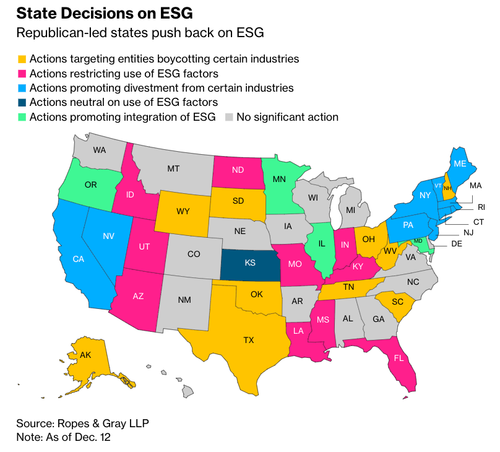 ESG is an outrageous scam!

The S in ESG stands for Satanic

However, in the interview, Fink said BlackRock took in $230 billion in 2022 from US clients, and the outflows were small, though he takes the issue “very seriously” and was trying to address the negative mood around ESG:

“We are doing everything we can to change the narrative.”

While Fink tries to save the ESG narrative, a former BlackRock senior executive, Terrence R. Keeley, recently opined in a WSJ article that after “trillions of dollars have poured into environmental, social and governance funds in recent years … there is astonishingly little evidence of its tangible benefit.”

Perhaps what Fink’s terrified about is a run on BlackRock funds because state officials and many others are realizing ESG investing is just another globalist ‘scam.‘