Dominion Voting Systems’ official website appears to have gone offine, only to have returned with password authentication. 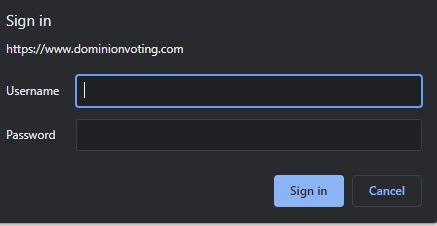 The timing of the password procedure being installed is odd, to say the least.

It follows Tucker Carlson’s bombshell report on Fulton County, Georgia that shows the voter integrity group VoterGA revealing thousands of votes appeared to have been erroneously marked in ballot tallies for Joe Biden.

“At least 36 batches of mail-in ballots from the November election were double-counted in Fulton County, that is a total of at least 4,000 votes,” he said. Watch:

Then Tucker discussed the instances of double-ballots in the election. Tucker Carlson then discusses the “seven falsified” audit tally sheets discovered by VoterGA.

The auditors’ update showed 74,000 absentee ballots lacked documentation, thousands of ballots were duplicated without proper documentation, and most shockingly, over 11,000 voters were not on the November election voter rolls, but showed up later on the December voter rolls.

Dominion Voting Systems is used in Maricopa County, Arizona and throughout the State of Georgia. It is unknown why the voting systems company put a password on its website.