Biden Has Handed America Over To The Biodefense Cartel
Advertisement

"Demonized" ESG Narrative Is Finally Getting To Blackrock's Larry Fink

On the heels of Biden’s September 12th Executive Order titled The National Biotechnology and Biomanufacturing Initiative, I wrote two days later that it “is a complete capitulation of our government to Big Pharma, the biotechnology industry and the entire transhuman cabal that wants to create Humanity 2.0 by changing our genetic structure.”

The Initiative literally opens the floodgates of taxpayer resources and turns over government control to the biotech and Big Pharma industry. Some highlights include:

In sum, our nation has become the vassal of the biodefense cartel to finance its R&D, build its manufacturing capacity and train workers to fill its factories. What’s wrong with this picture?

The Executive Order required a number of reports to be compiled and submitted to the President on how to implement the Order. Just one month later, the White House released the National Biodefense Strategy and Implementation Plan. It dovetails perfectly with the Executive Order except that preparation started on the first day off Biden’s presidency. According to the American Economic Association (AEA),

Today, the Biden-Harris Administration fulfills a commitment that President Biden made on his first day in office: to review existing national biopreparedness policies and develop recommendations for how the Federal Government should update them, based on lessons learned from the ongoing COVID-19 pandemic and other biological threats our Nation faces.

Thus, we can see that this massive transfer of power actually started with Biden’s election and has been orchestrated for theater ever since.

The National Biodefense Strategy reveals more details of this Transhuman and Technocratic takeover. One new term that appears 21 times in the document is “biodefense enterprise”. Enterprise normally applies to a commercial business or corporation, but here it states “the United States will support an efficient and coordinated biodefense enterprise to protect the American People and its global interests.” In Annex I: Definitions, we get a glimpse of what biodefense enterprise means:

Stakeholders with a role in the prevention, preparedness, detection, response, and recovery from bioincidents (e.g., Federal and SLTT governments, nongovernmental and private sector entities, and international partners).

This language clearly reveals that the “biodefense enterprise” is a massive Public Private Partnership where the managing partner is not the Federal Administration, but the biotech/Big Pharma industry itself!

This term shows up 13 times in the National Biodefense Strategy and is clearly linked to the “biodefense enterprise”:

Enhancing the national biodefense enterprise will help protect the United States and its partners abroad from biological incidents, whether naturally occurring, accidental, or deliberate in origin. It will simultaneously build the U.S. innovation base for cutting-edge countermeasures, biosensors, diagnostics, and biosurveillance information technologies, and advance the biomedical and agricultural industries’ biodefense capabilities.

Again, the document offers a definition:

Biosurveillance: The process of gathering, integrating, interpreting, and communicating essential information and indications related to all-hazard threats or disease activity affecting human, animal, plant, and environmental health to achieve early detection and provide early warning, contribute to overall situational awareness of the health aspects of the incident, and enable better decision-making at all levels.

If you think existing surveillance is intrusive and a threat to freedom and personal liberty, you ain’t seen nothing yet.

I have discussed the “whole-of-government” strategy where the entire structure of Federal agencies is harmonized to a common purpose and objective. This in itself is a dangerous precedent that permits the weaponization of the whole government toward a common objective.

The concept of whole-of-society is a close relative. Here all sectors of society are lined up for a common purpose. What sectors? Humans, animals, plants and ecosystems. Furthermore, it’s top-to-bottom from national all the way down to local enforcement.

Driving down to local communities is the only way to  Section 3.1 Domestic Health Capacity:

Increase vaccine uptake rates for all recommended vaccines to over 85% of American population.

A secondary goal is to expand the propaganda machine to reach 80% of the American public, “while also countering and mitigating the spread of disinformation and misinformation.”

All cautionary methodologies and testing are thrown to the wind. Vaccines will be created within 100 days of virus detection (i.e., a self-declared “pandemic”), mass produced within 130 days, distributed with military efficiency and speed, and injected into:

Not Your Grandmother’s Vaccine

I know there are some readers who are thinking they would like to get vaccines faster to prevent disease. However, none of this applies to old-school vaccines. Nope. None. This is all pointed toward an endless conveyor belt of mRNA and DNA injections designed to hack your human condition. – you and eighty-five percent of the population, in perpetuity. Biden cleared that up in his original Executive Order:

We need to develop genetic engineering technologies and techniques to be able to write circuitry for cells and predictably program biology in the same way in which we write software and program computers.

Are you ready? Are you awake to what is taking place here?

I have addressed the whole picture in my new book. Solutions and resistance will not arise without understanding the nature of this evil beast that has come upon us.

The Evil Twins of Technocracy and Transhumanism

Perhaps you can see why I used the word “Evil” in the title of my just-released book. Perhaps you can picture the golden skulls, all ornate and rich looking on the outside, but revealing death underneath. Indeed, Technocracy and Transhumanism are promoting a future that only holds death and destruction for mankind. 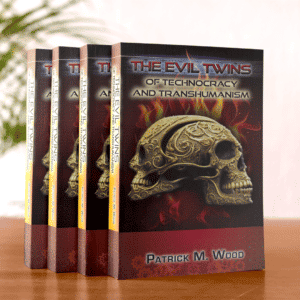